Saints’ relics ‘remind us of a world beyond our own’ 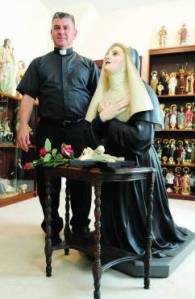 Father Eugene J. Carellatells Claudia McDonnell of Catholic New York that he became fascinated with saints as a small boy in Brooklyn, accompanying his great-grandmother to see shrines at their parish church. Today the Staten Island priest has a huge collection of statues and relics.

Relics “remind us of a world beyond our own” and “connect us to the communion of saints,” said the pastor of St. Adalbert’s Parish in the New York Archdiocese.

Relics also are a reminder that saints “were people like us, struggling to live a good life,a Christ-like life, and in the end they won the battle,” he added.

Jesuits at Oxford find painting believed to be by Michelangelo 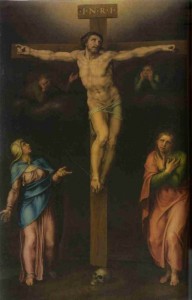 A painting of Christ’s crucifixion believed to be the work of Michelangelo has been hanging in the residence of a small Jesuit community at Oxford for more than 70 years.

Purchased at auction by the Campion Hall community in the 1930s, the painting was believed to be the work of Marcello Venusti, one of Michelangelo’s 16th-century contemporaries. But recent tests revealed that the work was indeed created by the Renaissance painter, reports the National Jesuit News.

The discovery was made by historian and conservationist Antonio Forcellino, who used infrared technology to uncover who he believes is the true creator of the painting.

BBC News reported that the residents were both excited and concerned by the find — excited because they had something very special in their midst, but also concerned that the piece was too valuable to continue hanging on a wall in their residence.

So the work of art has been removed and sent to theAshmolean Museum of Art and Archaeology at Oxford University for safekeeping, according to the Jesuits.